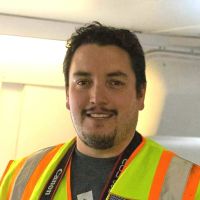 The fifth round of the EPIC Photo Competition – themed EPIC Outcomes – was won by Damien McNamara of SouthRoads in Oamaru.

Damien documented the restoration of State Highway 83 between 5 and 8 January following a flooding episode that washed away one end of the Parsons Creek Bridge and rendered the main route between Oamaru and Omarama impassable.

The central South Island towns of Otematata and Omarama are small, each with a population numbering in the hundreds. But over the summer holidays, the populations of these towns rise by thousands as holidaymakers take to the campgrounds and rivers across the area.

The damage to the road at the bridge caused a logistical nightmare heading east and west on the highway, preventing these holidaymakers from travelling, and leading to chaos on the alternate route.

Damien is a field technician and was one of the first on-site to help bridge the gap and reconnect the region to the rest of the country as fast as possible, by ensuring all services were located before work commenced.

“That’s the main route from Oamaru to Omarama, otherwise you have to go all the way up to Tekapo. The other route was out too across the Waitaki Bridges. It was our biggest priority to get the road opened by the following weekend, when everyone had to head home again.”

Damien’s career with SouthRoads started around eight years ago, and his job took him across Otago roads, tending to road signs, edging and other general maintenance work. He was also passionate about drones, previously running a small business as a drone operator.

When SouthRoads discovered they had a skilled drone operator on the team, they offered him a role as a field technician and supported him to start the process of becoming certified as a professional drone pilot, able to fly safely under the law in restricted areas such as around state highways.

Seven months later, Damien conducts aerial surveys to calculate the work required for jobs, also supporting the company’s machine operators with location of underground services such as power, water and phone lines. His toolkit doesn’t just consist of a drone he also has a ground penetrating radar (GPR) unit, EMF locator, and his ute has an inverter setup to charge everything, meaning he drives his own office and can work fully mobile.

His daily work could involve travelling through some of the South Island’s most beautiful spots to investigate ground movement on a work site, check the rate of coastal erosion or scan stock piles of aggregate and earth to provide an accurate volume.

He says the company’s excavator operators ‘have him on speed dial’, ringing when they need information so he can put through requests around locating underground services with before