Aotearoa New Zealand has seen some epic civil construction projects throughout its relatively short history. From roads and rail to ports and power, we take a look back at some of the most epic civil projects of the distant and not-so-distant past.

Reclamation of the Wellington Waterfront 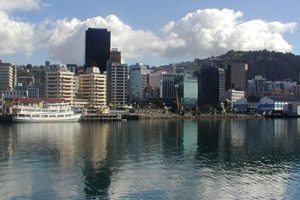 Much of Wellington’s waterfront is built on reclaimed land.

The reclamation of land on Wellington’s waterfront is an epic example of Kiwi work ethic and ingenuity. It all begin with George Bennet, an arrival on the Berenicia, who single-handedly performed the first of the reclamations in 1848, hacking at the earth with a pick-axe and shovel and throwing it into the harbour. This expanded an often-difficult path connecting Willis Street to Beach Road – which is now Lambton Quay.

Commissioned reclamation work began in the 1850s, with the goal of significantly expanding the useable flat land for the hilly capital city. And in the 1960s and 70s, extensive reclamations were done to meet the demands of container shipping and changing methods for handling cargo.

The reshaping of Wellington City’s shoreline has added over 155 hectares, completely transforming not only the physical landscape but the social, economic and cultural landscape of the capital too.

Wellington’s Waterfront is iconic. It is as vibrant as it is windy, with its railways, eateries, bars, docking ships and beloved sporting fortress, the Cake Tin (Sky Stadium). 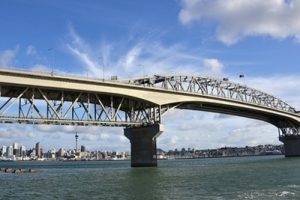 The Auckland Harbour Bridge changed the face of Auckland.

Before the opening of the Auckland Harbour Bridge in 1959, the only route connecting the North Shore to the rest of Auckland was via Great North Road. There were ferry services that transported people – and goods – directly across the Waitemata Harbour, but they were expensive, infrequent and time-consuming.

The bridge took four years and hundreds of men to build it. At least three workers lost their lives through accidents during construction, and the unfinished bridge was nearly lost to high winds.

The opening of the bridge was a momentous occasion in the city’s history, with 106,000 people taking the opportunity to walk across it before vehicles could. The Harbour Bridge is considered an iconic structure of Auckland by many, lighting up the city with its Vector Lights.

As traffic increased, with 10 million vehicles crossing annually by 1965, it became necessary to expand the bridge from four lanes to eight. This was done using ‘clip-on’ technology manufactured by a Japanese company.

A key part of State Highway 1 and the Auckland Northern Motorway, the bridge changed the lives of many, allowing people to commute more easily to work and connect with friends and family. It significantly improved the efficiency of transporting goods and services. More than one billion vehicles have crossed the bridge since opening and an estimated 170,000 vehicles cross the bridge each day. 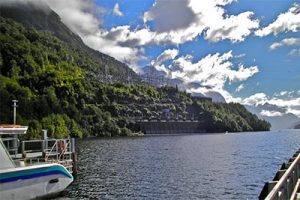 Completed in 1971, Manapouri cost $135.5 million and required an estimated eight million hours of labour. It was initially constructed to supply power to the Tiwai Point aluminium smelter near Bluff and was later connected to the South Island transmission network.

Workers excavated the station’s machine hall from granite rock, a massive 200 metres below the surface of Lake Manapouri. Water rushes through the underground power station via two tailrace tunnels and travels 10 kilometres to Deep Cove. 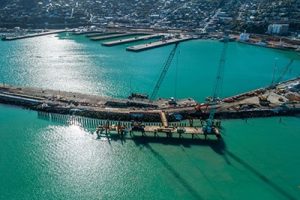 Lyttelton Port is a major freight gateway into the South Island.

Lyttelton, historically referred to as the ‘Gateway to Canterbury’, was officially established as a port in 1849 and has grown to become the South Island’s principal goods-transport terminal, with 34 per cent of New Zealand’s exports and 61 per cent of imports (by value).

Lyttelton Port has undergone numerous land reclamation projects, particularly during the 1900s, which greatly increased its potential as a port as well as the infrastructure of the region.

Now it is one of the main ports of the South Island. Over the past 100 years an immense amount of coal extracted from the island has been shipped from the port, and its facilities have homed LP gas and petrol for 50 years. The port is thus viewed by many as a primary South Island port for shipping energy. 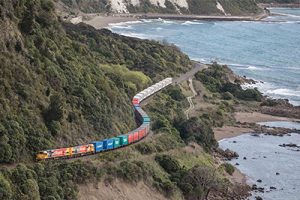 Rebuilding the Main North Line was a truly epic undertaking.

On 14 November 2016, the lives of thousands living on the Kaikoura coast were left shattered and stranded when a magnitude 7.8 earthquake struck, tearing down structures and mountains. Nothing was spared in its wake, including KiwiRail’s Main North Line, which was extensively damaged by slips and in turn trapped a train.

This damage to New Zealand’s longest railway line disrupted the crucial flow of freight – one million tonnes a year moves along it – as well as passengers of the Coastal Pacific Great Journey of New Zealand.

Because of this award-winning project – and the determination of all those involved in the rebuild – the people of Kaikoura were reunited with friends and family and the rest of New Zealand. Vital supply lines were restored, and the Coastal Pacific Great Journey of New Zealand returned, crucially restoring tourism to the stunning coast and beyond.

Make your own mark on NZ’s infrastructure landscape

The Waterview Tunnel in Auckland was completed in 2017 at a cost of $1.4 billion, and the long-awaited Transmission Gully roading project near Wellington is nearing completion.

Other major projects such as the Central Interceptor in Auckland and Takitimu North Link near Tauranga are currently underway. There are dozens of other major infrastructure projects in the pipeline waiting to start in the months and years ahead.

Do you want to make history and play a key role in the future of New Zealand’s civil infrastructure? Find a project and start now.