Skill, focus and artisan craftsmanship won the fourth round of the EPIC Photo Competition – themed EPIC People – for Ilona Turnbull of Topline Contracting in Hawke’s Bay.

Topline Contracting General Manager Carl Webber said it was a big win for the company, which was up against more than 50 other entries from across New Zealand in this competition round.

Pictured in the photo is Concrete Team Leader Karl Nielsen, who has been with Topline Contracting ‘since near the beginning’, when the company was founded in 2016.

Carl says the photo shows the focus, care and precision Karl and his team apply on the job every day.

“Karl’s not a big talker, but he is the guy who is 1,000 per cent loyal. The guys follow him not because he shouts or makes a fuss, but because he just gets on and does the job. He’s ‘Mr. Reliable’, always at work on time and has great attention to detail. He knows what he needs to do, and he does it well.”

He says when people join a civil construction company, it’s important for them to have senior team members to lead by example, which in turn shows new workers what is expected of them, and how to progress the their work to  a commercial standard.

“That’s one awesome thing about working here – the boss does it, and everybody follows because they are all doing it in the same conditions. And that’s invaluable. It’s one of the main reasons we’ve been successful.”

Carl says Topline considers itself a training ground for the wider industry, often taking on people who are ‘rough around the edges’, working them hard, and showing them how to be professional and work to an artisan level of quality. And for a company that has taken on 37 staff in the past 20 months, that is a big deal.

The company is just five years old, but is making a ‘huge investment’ in the people it has taken on through ensuring they get Civil Infrastructure Works (Level 3) qualifications offered through Eastern Institute of Technology (EIT). This civil infrastructure qualification provides workers with basic industry qualifications in work such as handling dangerous goods, traffic control and plant (heavy machinery) operation.

He says being a good employer is about showing commitment to the people who are there to work – something that’s recognised from the top by the owner, Taurus Taurima, who is often first on the work site to shake everybody’s hand when they come to the yard and still there to thank everybody for their work at the end of the day.

Carl says being clear with staff about the skill level required is very important. One of the company’s measures of success is how it trains its people, and once they have the skills they need to do a good job, they can earn a decent wage, and earn a decent living.

“They might be a bit rough around the edges when they start, but those get smoothed off with hard work. Training and skill is critical. Being able to retain it is really important, we want our people to know that. Our first graduation ceremony was so important to us we had it with the mayor present.”

The staff were also asked to bring their partners and children to the graduation ceremony so they could see their parents were being celebrated for their achievement, and the pride that comes from a job well done.

He says the company will keep showing employees commitment, and supporting them in celebrating successes, recognising mastery in the civil trades and acknowledging hard work.

Second prize in the EPIC People round of the EPIC Photo Competition went to Poppi Tucker-Low of Russell Roads for a photo of experienced staffer Johnny Bristol training a new recruit to the team, while third prize went to Hayden Bed from Downer Transport Services for showing the great attitude his team members Hadi and Kingi have on the job. 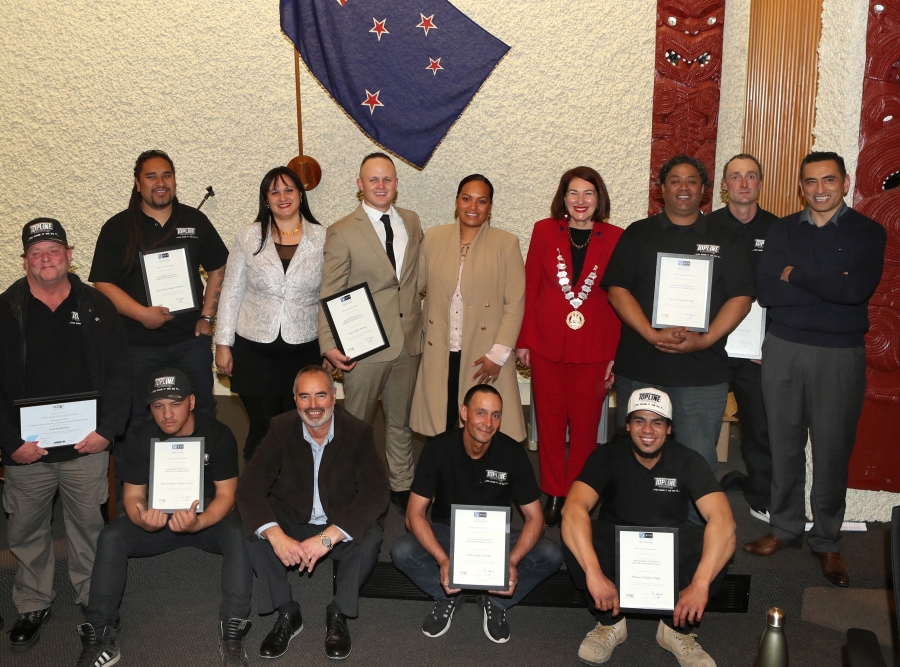